Greetings. Only one place to start today and that is with the six nil spanking we handed out to last year’s Ligue 1 runners up Olympique Lyonnais in our opening game of the Emirates Cup this afternoon.

Olivier Giroud opened the scoring sixty seconds before the half-hour mark, guiding Mesut Ozil’s cross from the right past the ‘keeper with a deft,  shouldered finish. And within nine minutes it was four, as Arsenal produced a prolific period of opposition-paralysing dominance, which was reminiscent of our first half goal glut against Liverpool in the league at Emirates Stadium last season.

Five minutes after Giroud’s opener, we launched a counter attack which Theirry Henry and the Invincibles would have been proud to call their own, as we transitioned from defence to attack through Aaron Ramsey and then Giroud, before Alex Oxlade Chamberlain took up the baton at full pelt and buried a low angled drive into the far corner.

It was a show of truly TremendArse composure from the Ox, at the end of a brilliant burst of pace, which gave us a tantalising glimpse of the penetrative, goal scoring potential we’re all so eager to see realised by the England international on a more regular basis this coming campaign.

Jay Jay Okocha’s nephew Alex Iwobi, who had impressed enough in the Singapore tour last week to be handed a start on the left of the front three today, grabbed our third just a minute later when Ramsey fed him the ball inside the area and he stabbed home a first-time finish into the near-post top corner with his left foot. 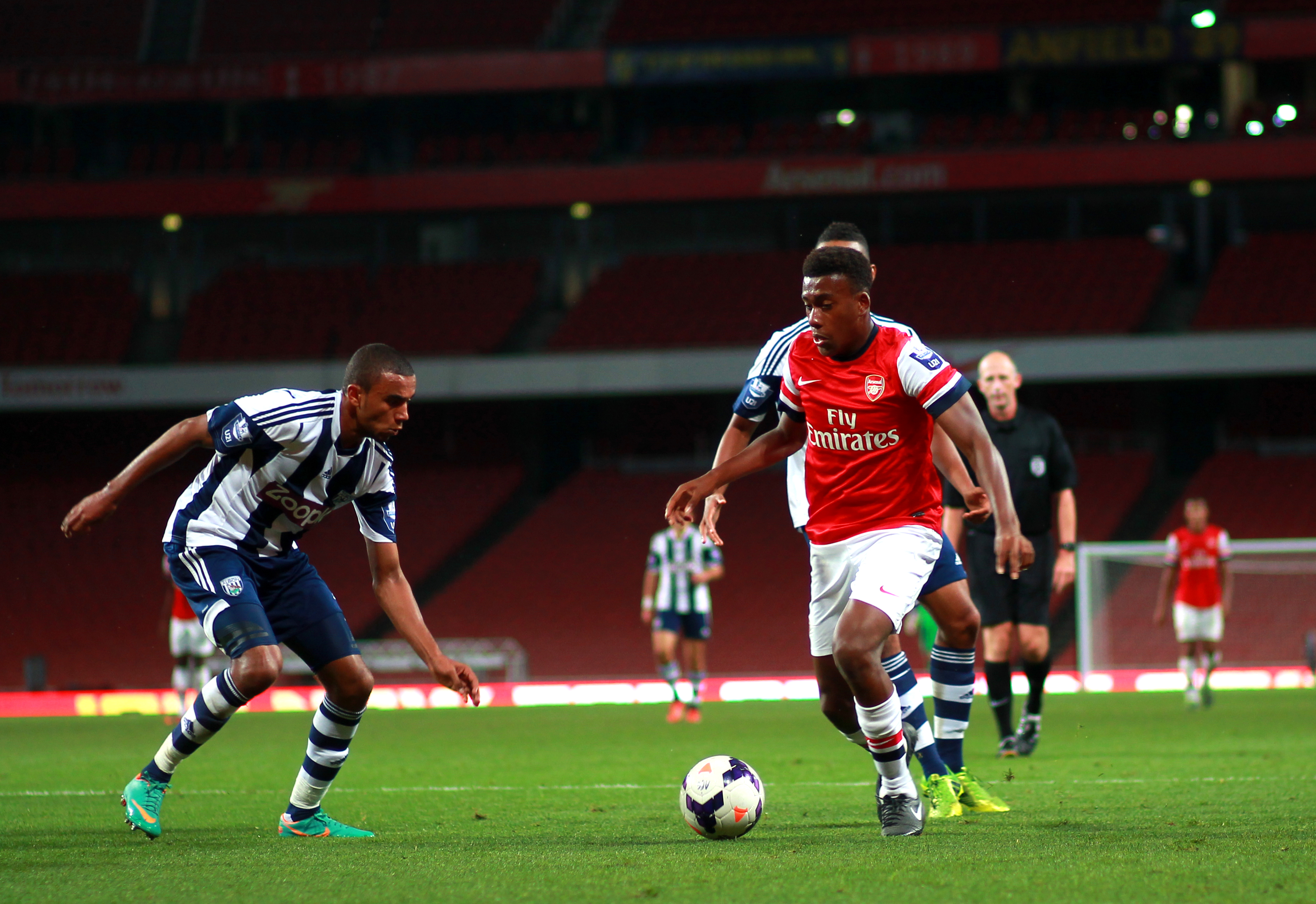 Iwobi in action for our under 21 team

What a moment it was for the 19 year old and after the game, he admitted he was a little dumbstruck after scoring in front of a home support which included several of his family and friends.

When Aaron passed me the ball I couldn’t believe it. I just swung my left foot at it and fortunately it went in and I was like ‘oh my gosh.’ I couldn’t believe it, I was in shock. I didn’t know what to do or how to celebrate but I enjoyed it! I have dreamt about it so many times but I never thought it could feel as good as this. My family, my friends, my close friends even my uncle was here today so I was glad to get a goal for them.

My gosh indeed, because just three minutes later, Ramsey started and finished another swift break, setting Ozil free down the left before the German’s perfectly weighted through ball was intelligently poked in off the upright at the near post by the Welshman. Lyon must have felt like they’d just been combo’d by a cross between Anthony Joshua and Iron Mike.

But how cruel football can be, because they were forced to come back out for the second period and were it not for mass substitutions, which inevitably disrupted our rhythm, they could easily have conceded double figures given the mood we were in.

As it was, Ozil capped his brilliant display with our fifth after 62 minutes, drilling home Giroud’s pass with a sweetly struck half volley across the ‘keeper. That goal turned out to be Ozil’s final contribution of the afternoon because he was immediately replaced by Santi Cazorla who capped off the scoring with a skidding, left-foot free-kick which he cleverly directed under the air-borne Lyon wall, with six minutes remaining.

Overall it was a very encouraging display and although people will rightly point out that Lyon were certainly not at peak fitness as it’s only pre-season etc, the same can also be said for us, and the fact remains that we battered them. Arsene could not have asked for much more from his players than such a confidence boosting performance as we gear up for Chelsea at Wembley next weekend and the start of the Premier League season a week after that. More of the same tomorrow please lads!

But before I leave you, a quick word on Jeff Rene-Adelaide who made his first appearance for the club following his summer move from Lens. The boss had described him as an attacking midfielder capable of playing centrally and on both flanks and he took up a role on the right of the attack when he entered the action after 71 minutes. Of course at just 17 years of age, the Frenchman has a lot of developing to do but from the little I saw today, he looks a great player in the making.

Those who know me will vouch for my over-exaggeration and very early appraisal of new players, but one piece of close control and through ball to Chuba Akpom from Reine-Adelaide was, I thought, ridiculously good for one so young – all the more so against experienced opponents.

He showed a Zidane-esque languidness, which oozed the arrogance all gifted footballers possess. And I know, I know – pre season, he has it all to prove, he’s only played 19 minutes, he’s 17, there’s no way of knowing how he’ll turn out etc, etc. But still. Wow.

The teenager was originally named in the squad for our tour of the Far East before being replaced due to what I’m assuming was an injury concern, but his brief showing today tallied with reports of his skilful showings in first team training.

And the boss was in agreement after the game, saying:

Reine-Adelaide is something special you know. He is a great talent and when he came on you could see that – 17 years old let’s not forget that. In fact I don’t remember how I played at 17 but I didn’t play like that!

With the likes of Gedion Zelalem and Dan Crowley also emerging as highly promising midfielders at the club, we’re certainly well stocked in the starlet category and it does make you wonder how we’ll manage to make use of them all. Yet you can never have enough good players and it’s a ‘problem’ I’m certain Arsene will relish resolving over the next few years.

Right, I’m off to go order my new replica kit with ‘Jeff’ on the back.