Hello and welcome to a brand new month. First off, a quick apology for the lack of a post yesterday. I was half way through writing one, when I lost online access. My laptop said I had ‘limited’ service which actually translates as ‘no service at all.’

Just as I was about to call my provider, I learned that whilst doing a spot of gardening, my neighbour had severed the fibre optic cable in my front garden. Brilliant. Anyway, it was an honest mistake which has since been remedied and here I am. No harm done. Except to his electric hedge trimmer…

But back to the here and now, and indeed Tuesday’s there and then, and I’ll start with a few words from former Gunner David Seaman, who spoke to BBC Sport about Petr Cech and the two positions he feels we’re still lacking in.

He’s (Cech) part of the jigsaw that’s nearly finished. It’s not all about Cech. We still need a good centre-half and a Patrick Viera or Yaya Toure-like midfielder. But before, we were having to sell players – like Cesc Fabregas and Gael Clichy. The club’s now got stability and the finances to pay wages and big transfer fees. By bringing quality players in like Cech, that will be what we need to win the Premier League. He won’t want to come to Arsenal to be a number two. He’s got trophies behind him and I would say he’s bang in the prime of his career. He’s got at least another five or six years ahead of him.

The double, Double-winning ‘keeper then touched on how Cech would be missed at Stamford Bridge, saying:

I’m sure he will be (missed). He’s a character. He’s a confident speaker and when you see him out in public, he loves talking about goalkeeping. It’s a massive boost for Arsenal. It’s what they needed. He must have had a list as long as his arm of clubs to go to, so I’m so happy he chose Arsenal.

Onto potential departures and Lukas Podolski is reportedly closing in on a move to Galatasaray. I think he’ll benefit from a slower pace in the Turkish league and good luck to him.

From the beginning of his Arsenal career, Poldi seemed a player who’d lost a yard or five, from the fresh-faced, left-wing flyer who shone for Germany at the 2006 World Cup. He’d failed to make the grade at Bayern Munich and having enjoyed a fine campaign for Cologne, was brought in alongside Olivier Giroud, to help make up for the shortfall in goals following Robin van Persie’s sale.

And in his first season he did just that, finding the net a respectable 16 times in all competitions. But he played less and less over the following two seasons and despite still possessing what Arseblog hilariously described as ‘a left foot that could smash a ball up Superman’s arse’, he never quite had the all round game to cement a spot in the starting line-up. That said, if you look at his stats, he leaves with 31 goals from 55 starts overall, with 8 from 9 in the Champions League. Not bad at all.

Finally for today, a word or two on Abou Diaby who was officially announced as having been released by the club today. I think his career, destroyed as it was by injury before it had really begun, has been one of the great tragedies of our recent history. Of course many will point out that he’s picked up a handsome wage whilst not providing any output to help the club’s cause, but that is beside the point.

It’s not his attitude or his talent that have let him or us down. It’s a battered and bruised body, whose ultimately futile travails in regaining full fitness, can be traced back nine years to a ridiculous challenge by an opponent. There is a wider point to be made here, about our whole mindset as a nation, when it comes to how we evaluate the strengths of the footballers we produce.

Why do we for instance, value mindless, non-stop effort over intelligence? A discussion for another time maybe but a brighter mind may not have steamed in with such outrageous inaccuracy and inconsideration for a fellow pro, as that Sunderland player did that day in 2006. Or to put it in Arsene Wenger’s words when Eduardo was similarly injured at Birmingham two years later, “what was that player even doing on the pitch?”. It still hurts, all these years later. 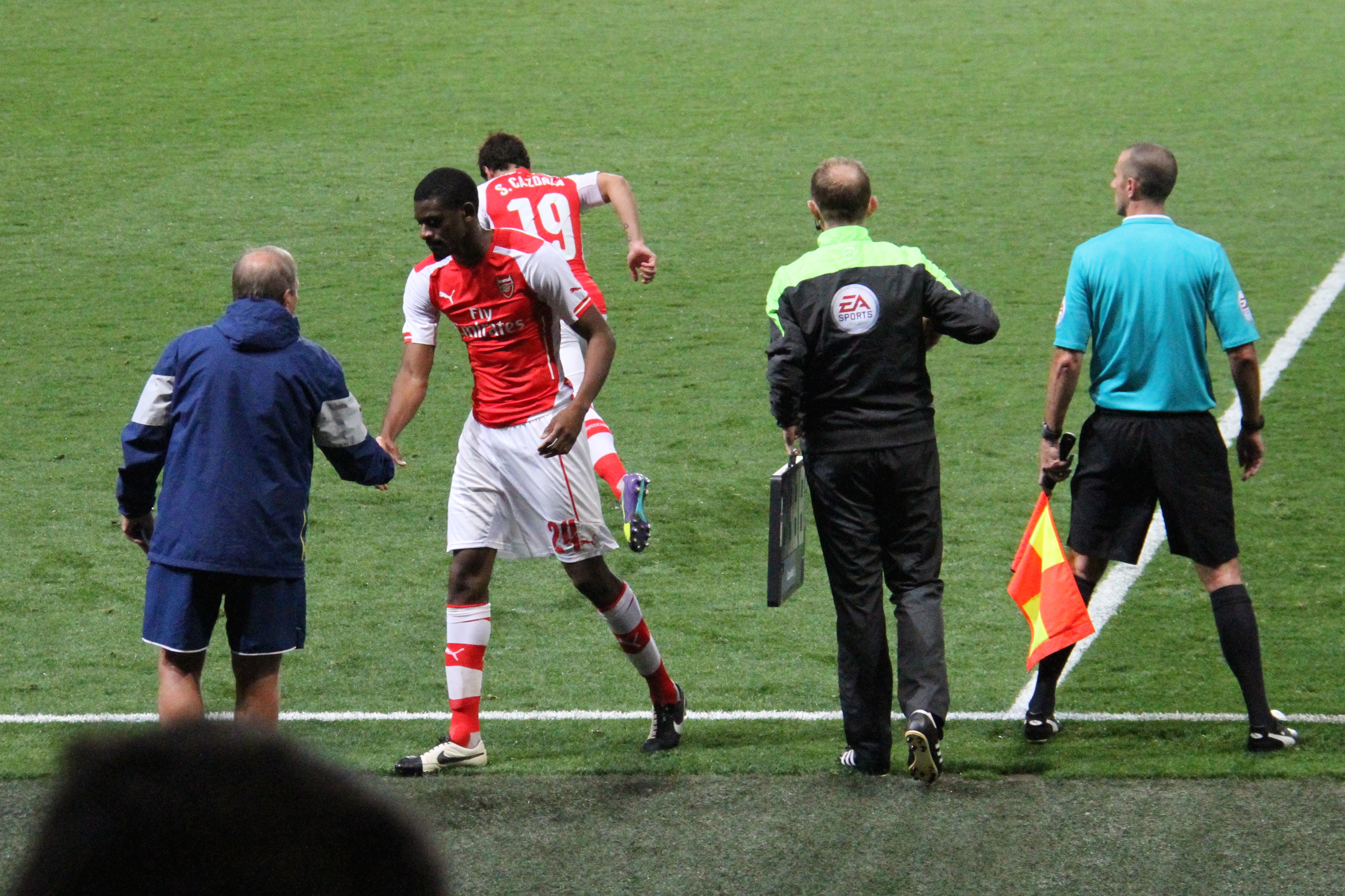 Time to say a reluctant goodbye to Abou Diaby

Looking at his talent in isolation though, my view is that we’ve been robbed as football fans above all else, of a truly special talent. He had that rare ability to make it seem as though he was the older kid in the playground, dominating his younger counterparts – a combination of technical brilliance and extraordinary athleticism. I’ve only seen a handful of players possess that in my time following the game: Ruud Gullit, Patrick Vieira, Thierry Henry and most recently, Yaya Toure.

My hope is that he continues to train with the club and miraculously finds a way to overcome his injury troubles. Realistically though, retirement must be a real consideration for him at this point.

On that sobering note, I’m off to go do an impromptu ice bucket challenge – it is f*cking hot in London today – and see if I can find any of my neighbour’s garden tools to ‘misplace’.