Welcome back. It’s a bit scarce out there in terms of Arsenal news today, so I’m afraid I’ll have to keep this as short as Jose Mourinho’s memory when it comes to spending money.

But speaking of recollection, can anyone remember the last time a player was one of the first names on England’s team-sheet, yet not guaranteed a starting spot at club level? Because I’m struggling to think of one.

Yet having rounded off last season with a stunning two-goal showing for the national team, a little while after starting the FA Cup Final from the bench for Arsenal, that is exactly the position Jack Wilshere finds himself in.

Francis Coquelin and Santi Cazorla ended last season as indisputably first-pick for the two central midfield positions and whilst Aaron Ramsey has publicly stated that he prefers the central role, and has been afforded all his pre-season game-time there, Arsene Wenger says he sees Wilshere in a more advanced ‘creative’ role, despite the England management trying to develop him in a deeper Andrea Pirlo-esque position at the base of their midfield.

I suppose in one sense, it’s a compliment to Wilshere’s array of outstanding attributes that at 23, he’s still considered a Jack of all-trades when it comes to midfield play. But if he’s to find consistency in his game and take his level up a notch or two, he – and his managers – will need to figure out what position makes the most of his abilities. 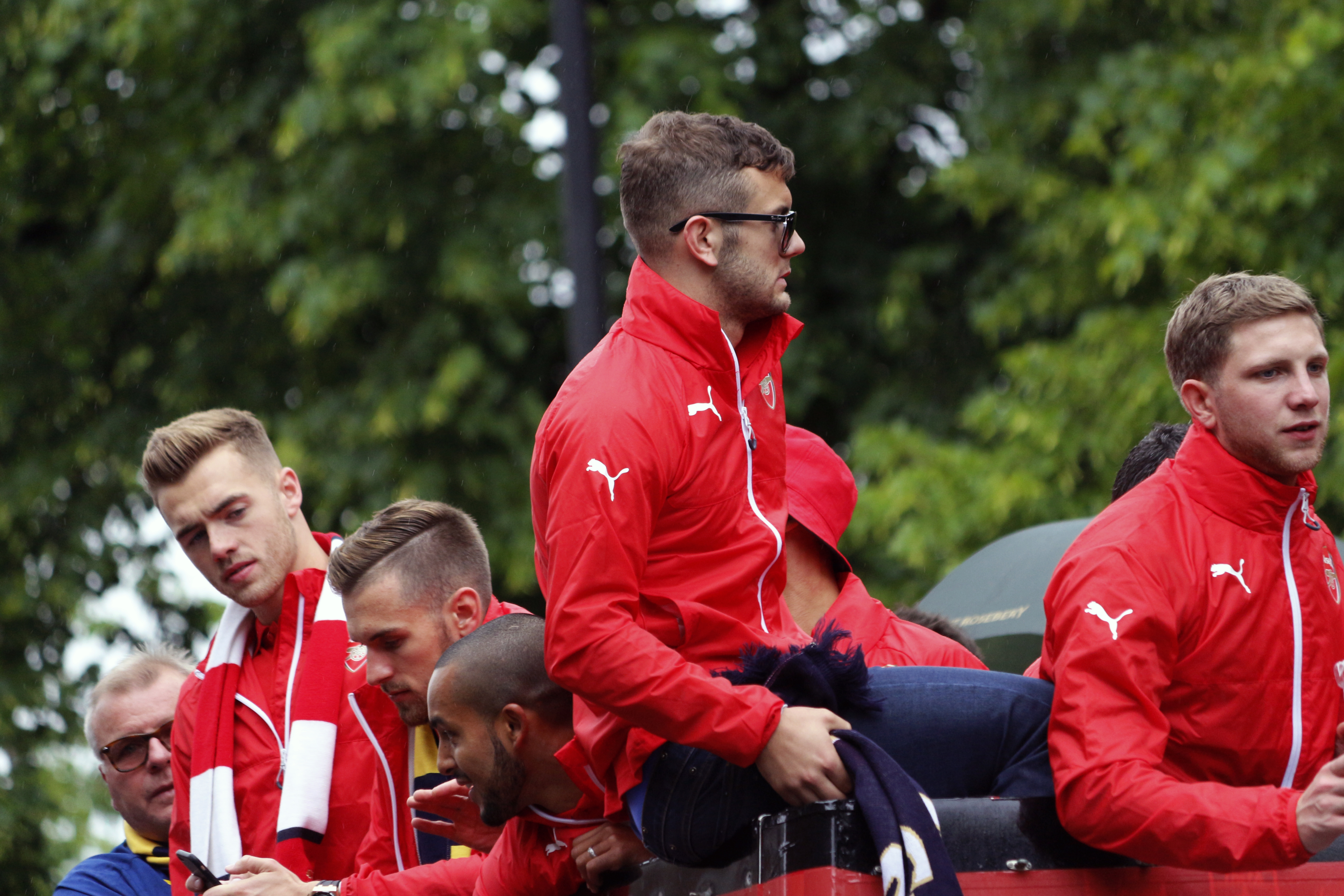 Jack at our FA Cup parade

For instance, is he predominantly a tempo-dictater, spraying passes from deep and keeping his side’s game ticking over? Or is he an all-action number eight, who can track, tackle, pass, dribble, drive his team forward single-handedly and regularly contribute goals and assists? Or, is he a wide player, with the freedom to drift infield as one third of a fluid, attacking triumvirate supporting a lone front man, as he’s been for us in recent times from the right?

I think the answer is he can almost perform all three roles equally as impressively, which is partly why he finds himself in this positional limbo. But in terms of his prospects of a starting place in this Arsenal team, the question becomes can he perform any of the roles better than their current incumbents?

It’s a dilemma Arsene will have to confront sooner or later and although a season is long and football is increasingly a squad sport with so many fixtures crammed into a single campaign, for the biggest games, the ones every top player lives for, he’ll have some tough choices to make – as he did for May’s FA Cup final in fairness.

My concern is that I just can’t imagine Wilshere accepting not being an automatic, first choice selection for too much longer if he manages to stay fully fit for a sustained period. And that’s not to say I’d drop Santi, Francis or Aaron for him, or indeed Mesut, Alexis or the Ox for that matter, but we do have an overload of talent in the middle of the park and something, someone, will eventually have to give.

Anyway, one thing Arsene certainly isn’t in any doubt about, is Wilshere’s overall footballing quality. Speaking to the official site, the manager said:

He’s a top-class player with a top-class potential. No matter how good you are in life, you need to have a consistent presence at the top. Today, what top-level sport doesn’t suffer is to be in and out because it’s too demanding physically [to stay in]. What you wish for Jack is that he can compete now for six months without any problem, or for a year without any problem, and then you will see the player we all know he is.

And of course, even before considering where to play him, the main thing from Arsene’s perspective regarding Jack is the midfielder being fully fit, something he’s only managed intermittently so far in his career.

Moving on and the club have confirmed Wojciech Szczęsny is moving on, albeit temporarily, joining AS Roma on a season-long loan as expected.

A season in the Serie A sun should provide the Pole with regular first-team football and give him an opportunity to either convince Arsene he deserves another shot at being our number one stopper, or failing that, to secure himself a permanent move to the Italian capital, if not another top-tier club. Best of luck Wojciech!

And finally for today, Joel Campbell is reportedly being eyed by Palermo. Personally, I would agree to the move but only under the proviso that they let us have first dibs on the next south American gem they unearth. Because in recent years, they’ve introduced the likes of Edinson Cavani, Javier Pastore and Paulo Dybala to the European game.

Either that, or we poach their south American scout, as ours only seems to notice the Samuel Galindos and Pedro Botelhos of that continent.

See you on Thursday.