Evening all. It’s Thursday already, which means just three more sleeps until we get to see Arsenal finally end our Chelsea hoodoo, with an emphatic five-nil win in the Community Shield at Wembley on Sunday.

According to sources close to the player, Aaron Ramsey will open the scoring with a speculative thirty yard effort, which will ricochet in off Thibaut Courtois’s perilously long nose, before Alex Oxlade-Chamberlain bags a brace – bullying Cesar Azpillicueta into an on-pitch breakdown along the way.

The scoring will then be rounded off by a goal apiece from second-half subs Alex Iwobi and Jeff Reine-Adelaide, with the latter claiming the Man of the Match award despite only playing for four and a half minutes.

Well, either that, or Jose Mourinho will park his bus like the bus-parking, game-wrecking, misogynistic, enemy of football that he is, and they’ll nick it with an offside, fluke of a winner after their incessant diving and referee-haranguing, sees us reduced to eight men.

Anyway, Ramsey has been speaking to ESPN FC at a New Balance boot launch recently, about his worst period as a professional footballer, which followed the career-threatening injury he sustained at Stoke City back in 2010.

Here’s what he said:

It was a difficult time for me, but it’s important in those times never to doubt your ability, because if you start doubting yourself then you’re going to go down a slippery slope — and you never know, you can find yourself shooting down the leagues. That was important, never doubting myself — I always knew what I was capable of doing. It was just trying to figure out how I could do it. The boss [Arsene Wenger] always believed in me. He gave me a new contract in that period and he’s always known what I could do.It was just a case of figuring out how to put things to the back of my mind, psychologically, with what went on with my injury. Then I quickly rediscovered my form.

The Welshman then went on to explain how he worked on his game to become more clinical in front of goal – an endeavour which resulted in him scoring a remarkable 18 goals from 38 appearances in all competitions, from a deep-lying central midfield starting position during the 2013-14 season:

I’ve always been able to get into the box, but in the past I’d been very rash in my finishing, I wasn’t clear with what I was doing in the final third. When it came to shooting, I was very rushed, I wasn’t hitting the ball cleanly. Then [two seasons ago] I composed myself and was able to do it in front of goal, and I reaped the rewards from that. 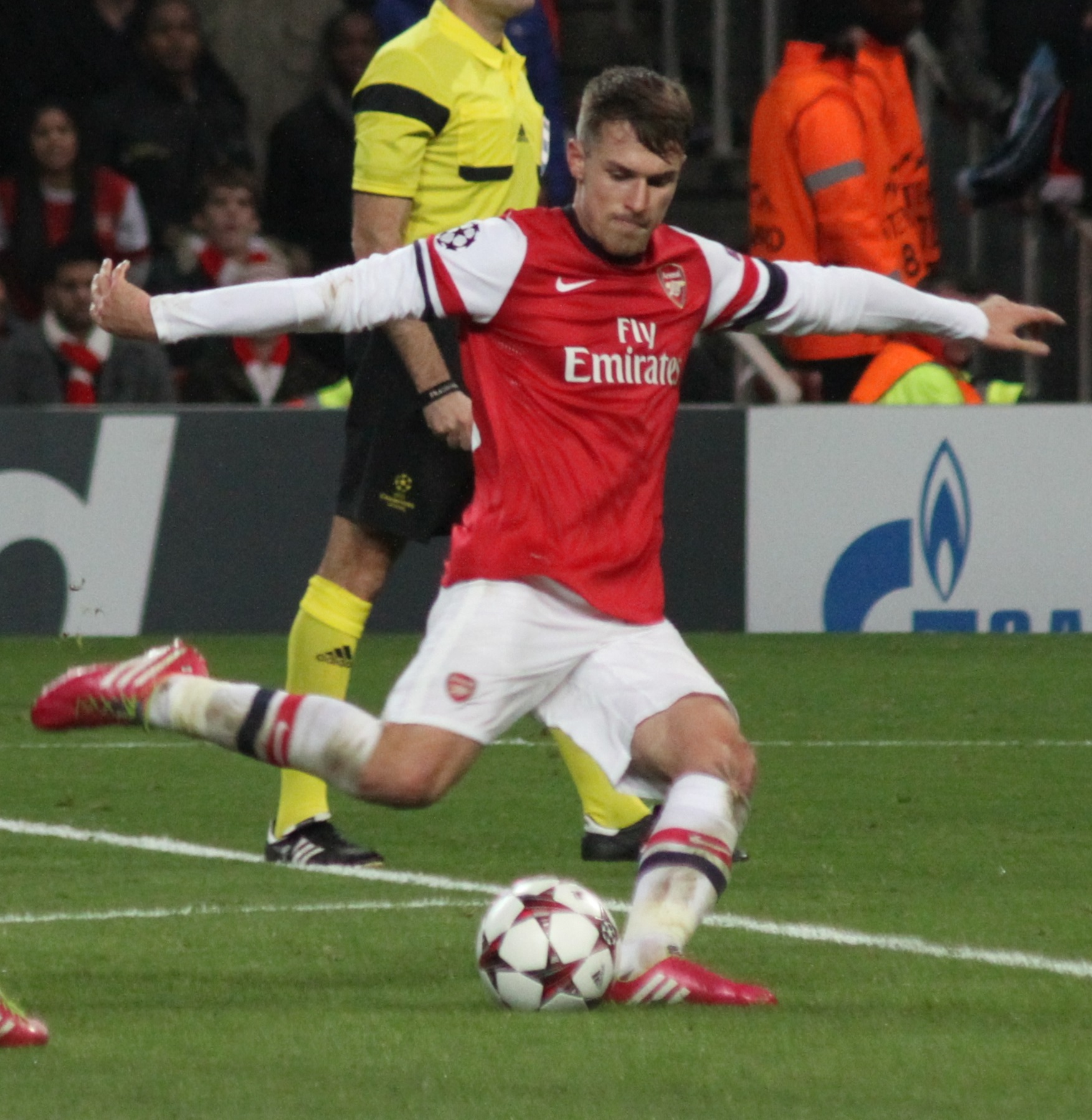 Ramsey lining up another effort on goal

And he also expressed how he prefers playing centrally, would love to be handed the club captaincy one day having worn the armband in a preseason fixture last summer, and had a few warm words for his manager’s fabled skills in developing young, emerging talent. He said:

I much prefer playing in the centre of the park, that’s where I feel comfortable. I like to be involved as much as I can in the game, and in the middle you’re definitely the heartbeat of the team. When you’re on the right, you can go minutes without seeing the ball, and that’s a long time when you’re out on the pitch. I’ve made a load of appearances now, I definitely feel one of the leaders, but I feel this group of players all have their own leadership skills. It was nice to be given the armband, even though it was just a preseason friendly, but it’s something I would like to do one day, to be captain. It’s a great honour and achievement to do that, I’ve had experience of doing it with my country, it would be nice to do that [for Arsenal] one day. He [Wenger] likes to get young kids with talent and natural ability and turn them into world-class players. He’s done that on many occasions in the past – he’ll continue doing that. His experience, knowing how to deal with [young players] is quite remarkable. He gets his satisfaction from seeing them develop as a player – and as a person as well – and gives them information on the pitch, and opportunities to go out there, play, and express themselves.

I have to confess that Ramsey isn’t a player I’ve ever thought of as captaincy material before, I’m not sure why really, because if you’re looking for a player who leads by example and embodies the class of the club on and off the pitch, then there aren’t many better equipped than the former Cardiff man.

I suppose his relatively young age, plus the fact he doesn’t appear to be the most vocal of players on the pitch has something to do with that, but now that he’s thrown his hat in the ring himself, I’d be the last to trample on it.

All I would say is that there are plenty of contenders right now for that particular accolade and it’ll be interesting to see who Arsene goes with long-term, with Arteta now not first choice and in the twilight of his Arsenal career, and vice captain Per Mertesacker not too far behind him.

All that said, I’m not really one who places a great deal on emphasis on who wears the armband, especially when there are no absolutely outstanding candidates for the job like Patrick Vieira or Tony Adams were in the past.

If you’re basing it on experience then Petr Cech has a shout, on vocals, then I suppose Per gets it, on effort, it’s Francis Coquelin or Alexis Sanchez, on tenacity Coquelin or Wilshere, and if it’s based on coolness under pressure I’d give it to Laurent Koscielny.

In other words, take your pick. As long as they all compete as best they can, pass well and play with organised freedom, scoring goals and keeping clean sheets, I wouldn’t care if Hector Bellerin wore it, so long as whoever does is lifting at least one of the biggest prizes come May.