Welcome all. Irie. Today we played the first of just four warm up fixtures before our Community Shield meeting with Chelsea, and one man’s showing left fans wondering ‘who needs Lacazette when we’ve got the predatory prowess of Chuba ‘Mr Lovergoal’ Akpom in our Ranks?’

Actually, it probably didn’t because we were playing a Singapore Select XI in a pre-season game, but still. The 19 year old Londoner, who made his first team debut for the club on New Year’s Day at Southampton this year and who impressed, winning a penalty in the home Premier League game against Aston Villa a month later, provided a reminder of his talent with a clinically dispatched treble as we ran out comfortable four nil winners at the Singapore National Stadium.

Jack Wilshere got the other goal – one of two penalties we were awarded and scored – and our pack of promising young guns who have made the trip to the Far East, including the likes of Gedion Zelalem and Dan Crowley, were all afforded some game-time as several first-team stars were saved for Saturday’s Asia Trophy final against Everton. For full match details including substitutions etc, take a look at the official site here, because instead I want to talk a little about Akpom and where he stands in terms of our striking pecking order.

Despite a prolific record for our under 21 side, Akpom has failed to score in three separate loan spells away from the club at Brentford, Coventry and most recently Nottingham Forest. Yet when his contract was almost up last summer, the likes of Borussia Dortmund and Liverpool were strongly linked with trying to snare his services which perhaps gives an indication as to how highly he is rated by scouts throughout Europe. 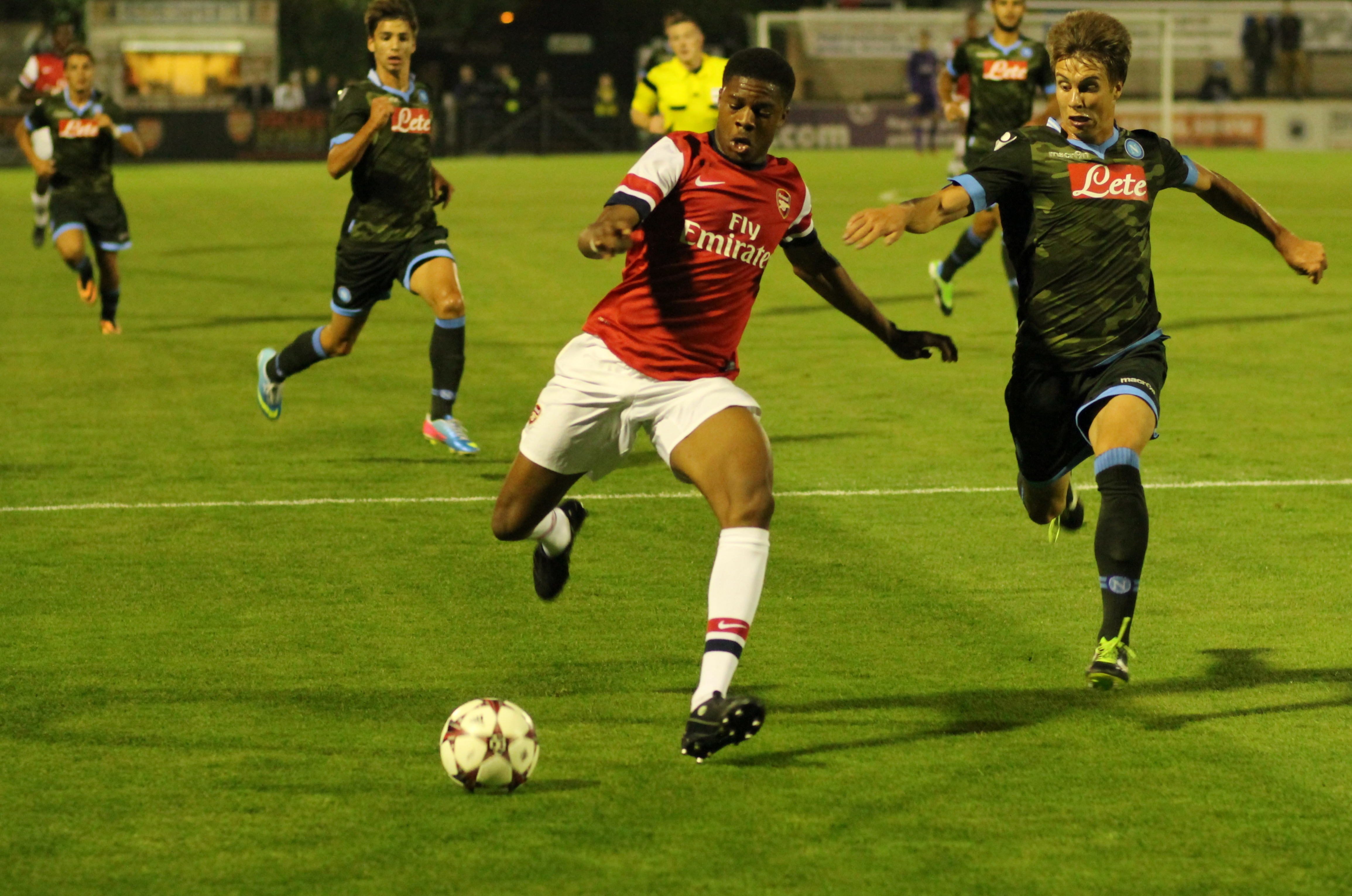 Of all of Arsenal’s promising young players, with the exception maybe of Serge Gnabry, who have yet to cement a regular first-team slot, Akpom increasingly looks the best prepared to make the step up but faces the daunting prospect of usurping at least Olivier Giroud, Theo Walcott and Danny Welbeck for a central striking role.

The fact that he has all the attributes to play wide in a three would help his case for inclusion if it wasn’t for the fact that Welbeck and Walcott can also do likewise. But he is far younger than that trio and also possess more mobility, or at least smoother mobility, than Yaya Sanago – the other young contender for a place at the tip of the Arsenal attack.

A Premier League loan spell at one of the lower ranked clubs did to me at least, seem the best option for him to get games and develop and I think along with the likes of fellow attackers Gnabry and Wellington Silva, Akpom has it in him to make a mark in the English top-flight. But the player himself was pretty clear in his desire to remain at Arsenal for the coming campaign when he spoke to Arsenal Player after today’s game.

I’m buzzing for the hat-trick but most importantly I’m buzzing for the win. It was a good team performance but it was even better to get a hat-trick. I’m just hoping I can carry on my form for the rest of the pre-season and take it into the season. You’ve got to give 100 per cent because you don’t get this chance often, so when you get it you have to make the most of it. Hopefully the boss has seen that I’ve been working hard in training, that I’ve been working hard on the pitch, and hopefully I can get more game time in the season. I’ve been at Arsenal since I was six years old, so that’s a few years and I really want to stay here. This season could be a big season for me and with a lot of hard work it could be a breakthrough season for me. The main thing is to stay here and I think the loans have helped me gain experience. I’m just getting better every time.

I sent him out on loan last year because I thought he needed that. This pre season, during the season I plan to keep him with us.

The boss then discussed the striker’s likely role in the first team, cautioned against getting carried away by a pre season performance and challenged his charge to prove his worth through a consistently high level of performance. He said:

That’s up to him. How much? (will he play) I don’t know but I just believe that it’s an encouragement to do well and to work even harder. He’s a young player and it can lift his confidence. The confidence in the dressing room that you sense from the other players is important as well and that can help him. Let’s not forget it’s a friendly. He’s a good talent but he has to work and show that in games. It’s down to performance and attitude. He has that grade to make between being a big talent and after an efficient talent week in, week out. That’s of course the target.

You sense the league cup remains Akpom’s best hope of a start next season and if we were to exit the competition early, I still wouldn’t rule out a loan spell later in the season for the player nick-named ‘Titi’ – after Thierry Henry – by some of his colleagues.

The wealth of young, and established, striking talent at the club highlights just how difficult a balancing act Wenger faces in meeting fans’ expectations for tangible, trophy-winning success, while simultaneously sating the desire of so many to see players rise through the ranks at the club and make a lasting impact.

Having joined Arsenal at six years of age, Chuba is certainly ‘one of our own’ and I really rate him. His first goal today was an unerringly opportunistic, first-time finish, his second a cooly converted spot kick which sent the ‘keeper the wrong way and his third a towering, close-range header, albeit into an empty net.

He certainly knows where the goal is and has nimble feet and great close control to compliment his naturally outstanding athleticism. But whether I’d be willing to let him learn his trade at the expense of a ready-made, world-renowned striker who would immediately guarantee us goals at the highest level, is another matter entirely.