Some good news to begin with today because as widely expected for a while now, Theo Walcott has signed a new long-term contract with the club, and it’s reportedly a four-year deal which elevates the England international into our top pay bracket on around £140,000 a week.

And in a double boost for squad stability, Santi Cazorla has also extended his agreement at Arsenal, putting to bed recurring rumours of a switch back to Spain for the awe-inspiringly ambidextrous, former Málaga man. 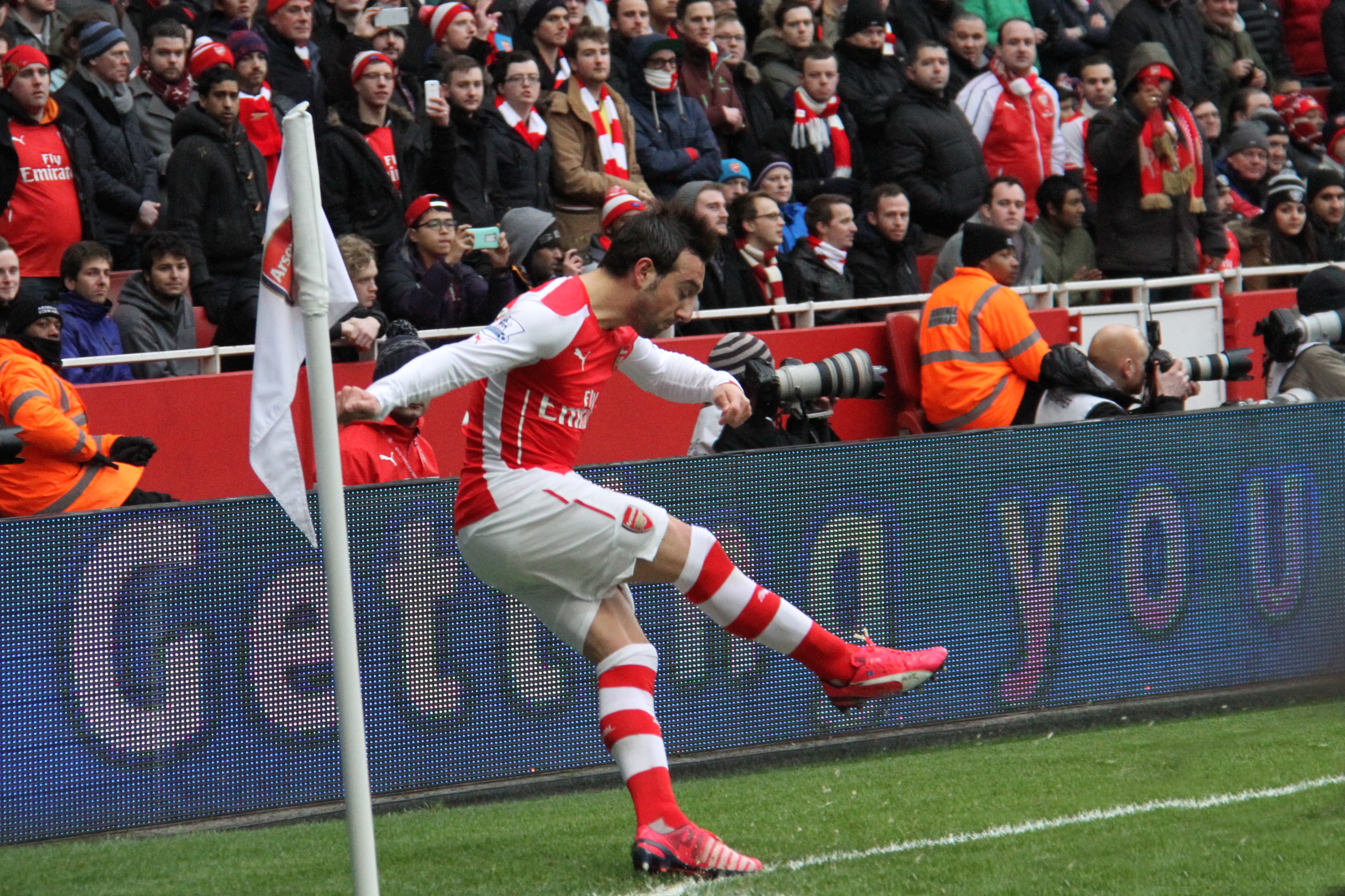 Santi’s so good, he can take corners with either foot

Frankly, I’m elated. And it sounds like the manager is too. He told Arsenal.com:

We’re delighted to have extended the contracts of Santi and Theo. Both are top quality players who are hugely important and influential to our squad. As well as their huge contributions on the pitch, they both have a great deal of experience and are very popular off the pitch. We’re very pleased with them both signing contract extensions, as it provides our squad with further stability of quality.

I’ve spoken about the qualities of both players in recent posts (here, here and here) and in particular, the Spaniard’s vital importance in the smooth functioning of the side’s pass and move style in all areas of the pitch, so today’s announcement is very, very welcome indeed.

The news should also give the whole club a boost, and strengthen the belief amongst the squad, that if the stick together over a few years, on-pitch telepathy will forge, and team chemistry should become just acidic enough to melt away any opposition standing in our path to the biggest prizes.

And Theo Walcott, who if I’m honest, needs to work on lowering his pH levels, as he’s a little too neutral when it comes to corroding the more physical of opposition defences, has been speaking to Arsenal Player about Sunday’s Community Shield clash with Chelsea, highlighting the Wembley showpiece as an opportunity for the team to lay down a marker ahead of the start of the new Premier League campaign next weekend.

It’s going to be very tight and I think both squads have improved. Chelsea will grow as well but I think the way that we ended the season, just the whole culture around the club now and everything about it, there’s just something special that will happen this year. Some people will think it’s just another pre-season game but us players want to go out and win every game we can. A lot of kids dream of playing at Wembley so you’ve always got to take it in, put 100 per cent in and I will, like all my team-mates will do too. We won’t want to let our fans down because they’re going to make the game special for us, I’m sure. It’s important to actually put out a message to the Premier League that we’re ready this year, against the title champions. We did it last year against Manchester City so there’s no reason we can’t do it again.

Theo’s England colleague Jack Wilshere, has also been speaking to the official site, explaining how and why, the Gunners are geared up for an assault on the title. He said:

We worked a lot on the first five seconds when we lose the ball. If we can win the ball back in the opposition’s half where, most of the time, when we win it we’ve got the players up front and the quality in midfield to find them… then we’re always going to look dangerous. We didn’t start the season well last year but the way we finished it… if we had played the whole season like that then we could have been champions. If we continue our form from the end of last season when we dominated games with our possession, and we won the ball back in better positions high up the pitch, then we’ve got a real chance. We want to win the league, of course we do. We feel we’ve been together a few years now, we’ve brought in world-class players who have had time to settle, we’ve added a world-class keeper with all of his experience, he’s been there and he’s done it, he’s won everything. So we really feel we’re in a strong position.

Finally for today, the club have confirmed that two of our young prospects have secured loan moves away from the club, with Jon Toral joining Championship side Birmingham City for the entire campaign – which will be his second, successive season in English football’s second tier following his spell at Brentford last term – and Dan Crowley linking up with League One side Barnsley until January.

A third youngster, defender Isaac Haydon, has also reportedly left on loan to work under Steve Bruce at Championship side Hull City for the season, but Arsenal are yet to announce the move.

Best of luck to them all because realistically, with the wealth of talent already at the club, both young and experienced, they have to really impress if they stand any chance of breaking into our first team set-up.